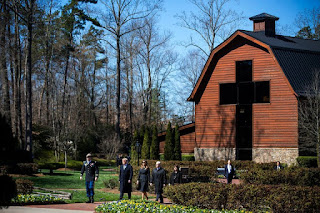 CHARLOTTE, N.C. — Standing at the simple wooden pulpit that the Rev. Billy Graham once used to preach his global crusades, his five children and evangelists from around the world gave tribute on Friday to a man who for half a century was the world’s best known living apostle of evangelical Christianity.
Mr. Graham, who died last week at 99, was eulogized in front of the Billy Graham Library in Charlotte under an enormous white tent reminiscent of the “canvas cathedral” where Mr. Graham conducted his breakout crusade in Los Angeles in 1949.
President Trump, Vice President Mike Pence and their wives attended the funeral, but were given no speaking role. The funeral gave the platform instead to the disciples who carry on Billy Graham’s ministry — including evangelists from India, Lebanon and South Korea — and his children, who offered testimony that was sometimes very personal.
Ruth Graham, one of his daughters, spoke of how she returned home to her father fearing harsh judgment after her second marriage ended.
“He wrapped his arms around me and said welcome home,” she recalled through tears. “There was no shame. There was no blame. Just unconditional love. My father was not God. But he showed me what God was like that day.”
The details of the funeral had been meticulously planned by Mr. Graham himself 10 years ago, befitting a man known to choreograph his mass crusades to the last altar call. The coffin was built of pine plywood by inmates at the Louisiana State Penitentiary in Angola. The pulpit was the same one Mr. Graham used in his crusades in the 1990s.
The expectation was that the funeral would draw all or most of the living presidents who were healthy enough to attend. Three spoke at the opening of the Billy Graham Library in 2007 and former Presidents George W. Bush and Bill Clinton came to Charlotte earlier this week to pay their respects to the Graham family.
But in the end, the only president who attended the funeral was Mr. Trump. In remarks on Wednesday when Mr. Graham’s coffin was laid in honor at the Capitol Rotunda, the president did what so many have done in the days since Mr. Graham died: he shared his own Billy Graham story, about seeing him in 1957.
“My father said to me, ‘Come on son,’ ” the president said, “ ‘Let’s go see Billy Graham at Yankee Stadium.’ And it was something very special.”
Mr. Graham died at his mountain home in Montreat, N.C., on Feb. 21. His body was carried in a motorcade down the mountain and 130 miles east to Charlotte, as thousands waved farewell from overpasses along the interstate.
The funeral on Friday, under a 28,000-square-foot tent that shuddered in a stiff wind, drew other political dignitaries besides the president and vice president, including Ben Carson, the housing secretary, the former New York City mayor Rudolph W. Giuliani, Gov. Roy Cooper of North Carolina and his predecessor, Pat McCrory.
Some attendees remarked that it was an unprecedented gathering of evangelical luminaries. They included the megachurch leaders Joel Osteen, Rick Warren and A.R. Bernard, the best-selling author and speaker Beth Moore, the radio and television host David Jeremiah, and the Rev. Jim Bakker, who has returned to television ministry after a corruption scandal that sent him to prison.
The evangelical movement is now far more divided than it was under Mr. Graham, mostly because of politics. One wing makes no apology for having linked the evangelical church so closely with the Republican Party and President Trump. Another wing sees it as undermining the Gospel message.
The Rev. Ed Stetzer, executive director of the Billy Graham Center at Wheaton College, said before the service started: “My hope is that this funeral will remind us to put the evangelism back in evangelical.”