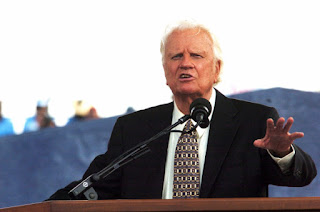 World famous evangelist Billy Graham is set to celebrate his 99th birthday on Nov. 7, with son Franklin Graham announcing that the Billy Graham Evangelistic Association will mark the major highlights of his life throughout the next year.
“Nov. 7 will be a big milestone for my father as he turns 99 and enters his 100th year. As a family, we are just so very grateful that he is still with us. His mind is good but he’s quieter these days. He can’t see or hear well, but his health is stable,” Franklin Graham said Wednesday.
“On his birthday, some family will be with him and we’ll give him his favorite cake — a lemon cake with lard icing. He loves those cakes — but it has to have the lard icing,” he added.
“At the Billy Graham Library we’ll have a special celebration that day, as this year is also the 10th anniversary of the opening of the library. We’ll have birthday cake for everyone who comes by.”
Franklin Graham explained that as his father enters his 100th year, the BGEA will be marking the major moments from his eight decades of ministry.
“The Billy Graham Evangelistic Association is moving strong into the future, but it’s also important to celebrate the past, so each month we will focus on a particular decade and highlight significant things like his 16-week evangelistic crusade in New York City, his impact on worldwide evangelism and personal testimonies of people whose lives were forever changed at one of my father’s crusades,” he said.
“During this next year we’ll have special content on billygraham.org and in Decision magazine, so be sure to check those out. My father always wants the focus to be on the Lord Jesus Christ, and not on him; and so we will point to the amazing ways God has worked in lives around the world, through the ministry of Billy Graham.”
The evangelist noted that his father is grateful for all the prayers and birthday wishes he has been receiving.
Franklin Graham, who is president of both the BGEA and Samaritan’s Purse, has been sharing updates and reflections about his 98-year-old father on Facebook as well.
In a post in October, he revealed that his father has one Bible verse in particular that he still has displayed in large letters around his house.
“Still today, my father Billy Graham has a Bible verse pinned up on the wall in his bedroom, printed in VERY large letters. In fact, it’s in the dining room, his bathroom, and several other spots around the house! Back before his 95th birthday, he was working on a sermon based on this key Scripture. It was his passion to memorize it, to saturate his heart and mind with it. He made it his life verse,” Franklin Graham said at the time.

DUNAMIS BUILDING ONE OF THE BIGGEST AUDITORIUMS IN THE WORLD