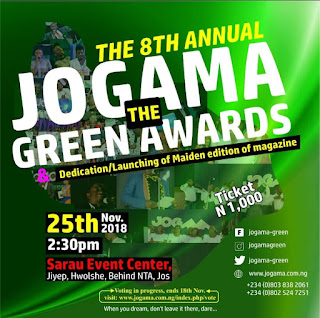 “SO LET’S TALK THE AFTERMATH OF JOGAMA”
JOGAMA 2018 was a huge success featuring artiste from all over The City of Jos and and other Local Governments in the State. JOGAMA has appreciated Hard work for 8yrs and this year was not an exception
The show was anchored by the best of the best….. They were perfect for the job.
Dance 360 opened the event with their killer dance moves. My legs were actually moving to the beats, but with no time the first award for the night was presented.
NEKEN CHUWANG was the show opener winning the Award for ALBUM OF THE YEAR,
With the release of the Grateful Album in 2017 Neken has been on the Spotlight
The FUSION AND STYLE SONG OF THE YEAR was the next award for the night and it was presented ALLAH MAI RAI
The  DANCE GROUP OF THE YEAR was won by DE EAGLES DANCE CREW. This ladies have shown us that “what a man can do a woman can do better” and am sure this award has motivated them to do better.
The next award was the NEW SPOKEN WORDS ARTIST OF THE YEAR,  this award presented to YOUNG LAN.
Sam Dung Africa took the stage and made me feel I was in the 15th century, his performance gave us a perfect picture of how the 15th was..
It was time to present the 4th Award of the night and this was the GOSPEL ENTERTAINMENT OUTFIT OF THE YEAR this award was presented to DPER.

The 5th Award for the night was FEMALE ARTIST OF THE YEAR, this award was presented to Nenrit. With the Success of
Never Forget this feature has put Nenrit on the spot light.
Atomic took us to another world with the creativity of his performance. His bars were just on point.
The VIDEO OF THE YEAR was NEVER FORGET BY NEKEN CHUWANG FT NENRIT DIR BY MSA. The night just seems to be getting better for Neken.
MSA won the  DIRECTOR OF THE YEAR with the video NEVER FORGET.
The 11th Award for the Night was MALE ARTIST OF THE YEAR, this award was won By NEKEN CHUWANG.
It was time for the performance that spiced up the night, this performance featured SoulPee, Neken Chuwang, Skiffy, and Adekunbi Lar 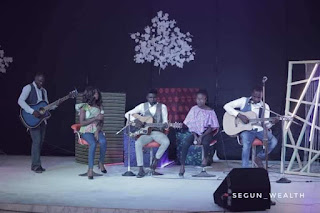 And it was time for the second to the last award of the night this was SPOKEN WORDS ARTIST OF THE YEAR, DIVA OF WORDS won this.
it was already time for the award that made the Night complete and the SONG OF THE YEAR was won by NEKEN CHUWANG.  This night is a real deal NEKEN CHUWANG career.
Congratulations to all winners.
JOGAMA keeps appreciating young talent and it won’t stop soon
For more enquiries you can visit www.jogama.com