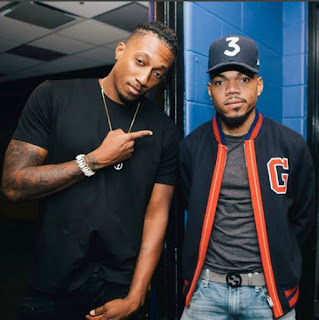 The above photo has caused quite a stirring of emotions once Lecrae’s post went up on Instagram with the description of, “Talkin God and Gucci.” Many rejoiced with excitement while others took to the shaming of “sacred and secular” argument. Regardless, of which side the straw stirs your drink, sip slowly because this is hot news.
We can only speculate what this photo means. Perhaps it’s just what it is, the two having an encounter and sharing pleasantries about the ice cream faced rapper Mr. Guwap and adding the sprinkles of Jesus to the convo cone. Maybe, the two were just walking out of the studio together after recording a fire track that could melt our hopes and dreams into a puddle of happiness. NOTE: Guwap is Gucci Mane’s nickname. When he came out of prison a year ago, he said it stood for, “God Unity Wisdom Opportunity Power.” He also has an ice cream cone tattoo on his face.
In a recent AMA Reddit that Lecrae did, someone asked him, “Will you and Chance the rapper ever collab?” Lecrae’s response, “Tried…didn’t get it done in time. Maybe in the future.”
The obvious thing to take away here is that the two were working on a track together and the timing didn’t work out. It is unclear which of the two could not complete their verse or feature in time though. So for speculation point number two, this could be them handling some unfinished business.
In that same AMA, Lecrae was asked about doing a collaboration with Kendrick Lamar. His response, “Last time we spoke we agreed the song would be something special for the world. I plan on it.” So the idea of Lecrae grabbing Chance the Rapper or any other on-top-of-the-game rapper for a song is definitely something he thinks about. Plus, he’s already worked with Ty Dolla $ign and revealed that he recently “connected with Logic.”
Lecrae and Chance being friendly together really is a testament to something familiar to the rapper, “All Things Work Together.” In the beginning of the year, Lecrae told Hot 97 that he’s met Chance, but they don’t have a true relationship. He also said, that in the future, he’d love to collaborate with him. Those statements were made in March and we’ve seemed to come a long way since then.
But then again, it’s just a picture. It doesn’t have to be so serious….