Share
Facebook
Twitter
Pinterest
WhatsApp
Email
Print
Telegram
The Nigerian economy is out of recession, the National Bureau of Statistics announced Tuesday.
According to the NBS, in the second quarter of 2017, the nation’s Gross Domestic Product (GDP) grew by 0.55% (year-on-year) in real terms, indicating the emergence of the economy from recession after five consecutive quarters of contraction since Q1 2016.
“This growth is 2.04% higher than the rate recorded in the corresponding quarter of 2016 ( –1.49%) and higher by 1.46% points from rate recorded in the preceding quarter, (revised to –0.91% from –0.52%). Quarter on quarter, real GDP growth was 3.23%,” the NBS said.
“During the quarter, aggregate GDP stood at N26,986,005.20million in nominal terms, compared to N23,547,466.91 million in Q2 2016, resulting in a Nominal GDP growth of 14.60%,” the report added.
An economy is said to be in recession after contracting for two consecutive quarters.
The Nigerian economy slipped into recession in early 2016.
Nigerian, citizens have mixed reactions about the recession and they say the country is not yet out of recession. The effects of the recession is yet to be seen on the citizens and in the market…… 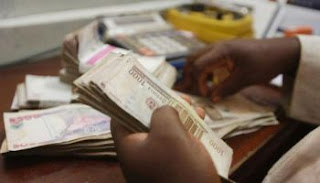