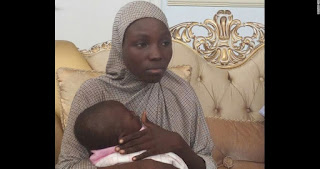 The Nigerian Army has announced the rescue of one of the girls abducted from Chibok by terrorist sectBoko Haram in 2014.

The army revealed the news on its official Facebook page, where it shared a photo of the girl.

The girl, named Salomi Pagu, is in the custody of the troops and is receiving medical attention.

Read the press release below:

Troops of Operation Lafiya Dole deployed in Pulka today rescued one of the Chibok girls abducted by Boko Haram terrorists earlier in 2014.

So far, preliminary investigations reveal that the young girl identified as Salomi Pagu is the same as the Chibok girl published on serial 86 of the online list of abducted Chibok girls.Currently the girl who was intercepted in the company of another young girl, Jamila Adams about 14 years old with a child are in the safe custody of troops and receiving medical attention.
You are please requested to disseminate this information to the general public through your news media.
Thank you for your cooperation.
Col Onyema Nwachukwu Deputy Director Public Relations Theatre Command Operation Lafiya Dole

ABOUT US
Gospel Native is your news, entertainment, music gospel website. We provide you with the latest breaking news and videos straight from the Gospel entertainment industry
Contact us: dachomogily@gmail.com
FOLLOW US
© Gospel Native 2022. Designed By LoonyTech
MORE STORIES
September 28, 2017

A MOVIE REVIEW ON GODS NOT DEAD 3 AND COMPLETE TRAILER