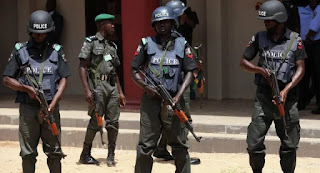 Police have confirmed the existence of armed militia groups in Benue state which they said investigations would reveal soon. Speaking on thursday during an interview on channels Television, the force public relations officer, Mr Jimoh Moshood, countered claims by Governor Samuel Ortom that there was nothing of such. “Yes, they were armed with AK-47(riffles); we have records, we have footage and you can’t just start arming people.” he said when appeared on sunrise Daily. He also disputed claims that the ranch guards wbho were inaugurated by the state governmant were unarmed, insisting that the police their evidence.
The force spokesman noted that it was unlawful for any person to be in possesion of arm without the consent of the Fedral Governmant. He added that the said ranch guards were meant to take noteof any suspicious activity and the report to the police, stressing that the investigations had revealed that they were carrying prohibitted.